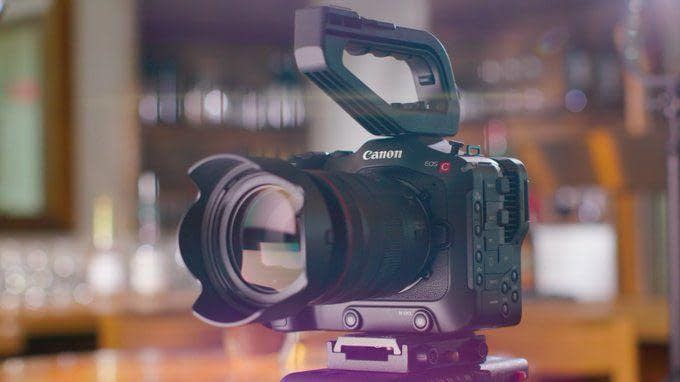 Canon has been introducing new advanced DSLR in market every time. A few months ago, EOS R5 & EOS R6 were launched. But this time Canon has launched a new amazing DSLR type cinema camera canon EOS C70 cinema camera which is Canon’s first DSLR size cinema camera. This can be carried in a normal bag, but this camera has the potential of a cinema camera. Canon C70 is a video camera and it’s come with a top handle. As we can see the shape button layer & the overall size are clearly inspired by canon’s DSLR still camera. Canon Eos C70 is best for a variety of production like documentaries, newsgathering, sports, music videos & independent films. Eos c70 uses an RF lens mount & it provides 4k/120p video recording using CMOS DGO (Dual gain output) sensor. While recording a video there is no recording limit with a full dual pixel AF system, subject tracking, and touch screen focus. It is the best portable & versatile camera in canon’s entire line-up.

The canon C70 built around a 4k super 35mm Cmos sensor featuring dual gain output (DGO). We will get to in a moment it’s the first cinema EOS camera to utilize canon’s Rf mount. Mount Adapter EF-EOS R 0.71x which is a mirrorless still mount since the EOS are lunched & it records 4k – 10 bit – 422 video internally to sdsc cards.

Looking from the front it looks like a large camera. From the back, it still kind of looks like a large still camera but if you take a look at both sides & you will see basically every key advantage of a dedicated  EOS cinema camera. Starting from the front we have the RF lens mount. Custom function button of which there is 13 in total. But you will notice the dual sd card slots positioned at a slight angle with timecode BNC connection right below it. In the back of the side, we get many more function buttons with of course the exposure & menu controls. which all are very accessible you will notice a joystick for operation & focus points adjustment along with two exposure dials.

What is Digital Gain Output (DGo)?

This camera comes with a Digital gain output sensor. The Dgo senor is a newly developed sensor. This sensor offers outstanding clean low light image quality as well as super HDR obtainment capabilities. Dgo sensor is also agreeable with Dual pixel AF giving the user greater freedom to acquire the picture they prefer. Canon C70 can produce an incredible 16 + stops of dynamic range by simultaneously reding the sensor out at two different game levels the C70 can combine the exposures to maintain the lower noise levels of a lower gain. Along with the higher saturation levels of a higher gain providing a super-rich high dynamic range image. This approach actually allows the C70 to have smother adjustment between ISO that means the C70 is now the first cinema EOS camera to feature an auto iso or auto gain function.

This cinema camera sensor size is 26.4×13.8mm. The sensor is the same one found in the C 300 mark iii, cinema camera. The sensor technology is CMOS DGO so, C70 can give the best performance in the low light situations.

C70 is the debut of the RF mount on the cinema EOS system. Basically, it means full compatibility with canon’s RF lenses. it actually gets better than that.  The cinema camera is also compatible with the EF mount. when you use optional Mount Adapter EF EOS R 0.71x.

In EOS C70 you can shoot 4k 422-10bit up to 60fps in the traditional H.26 long gap or inter-frame mode recording 4K recording tops out at 30fps. 4k recording can hit 120fps still with 422 -10 bit color. There is an option for recording for lower bit rate storage & H.264 proxy mode that can be recorded simultaneously.

Canon EOS C-70 you get two card slots one card for MP4 & another for 4k. 2k & another or even 4k progressive on one & 1080i interlaced on another which means this can excel in television production that still needs those formats.

Canon dual pixel AF is on board covering so percent of the area both horizontal & vertically. Dual pixel autofocus performance is super fast & consistent. The touch screen allows touch to focus as well. C70 inherits the EOS its afx technology from 1DX Mark iii which improves face recognition through deep learning. The tracking performance is insane.  There is no EVF on the C70 if you do external monitoring you will need to use the HDMI port also quickly turn on the peaking & Zebras & waveform monitoring feature available.

In EOS C70, canon gives an inbuilt ND filter. The small size canon somehow did manage to cram a four-stage ND filter inside the unit.

In C70 cinema camera canon gives Hand wrist grip strap. Under the strap, if u remove it u will find a quarter 20 tripod thread allowing u to mount the camera vertically. For social media video contest.

Naturally, canons camera battery life is good for photography & videography. In this camera battery slots & flip-out LCD which as you can see protrudes a bit from the back this extra space does not go to waste though because behind the LCD, you get audio level controls & of course the depth of the battery slot allows you to use BPA -30 or longer-lasting BPA- 60 batteries & charger that doubles as dc power.

This camera launched on 24 September. EOS  C 70 camera will be coming soon to the Indian market shortly. But actually, canon has not to tell anything about EOS C70 estimate value in India. In US states, the camera has been made serviceable at $5,499. Calculating in Indian currency RS – 4,05,270. EF-EOS R mount adapter 0.71x price in the USA $ 599.99.